I am not sure if I have mentioned it before, but I get a lot of texts to my mobile from horse tipping spammers. That’s all they are, they are not tipsters, just spammers who I would really love to get in a dark room somewhere. Utter scum the lot of em, sending texts to people in the hundreds of thousands, disturbing them in their homes, to tell them about some old nag which has no better chance of winning than any other.

I suspect the deal is, they just pick a horse and if it wins they text you again, and eventually if they are lucky enough they give you a few winners and then they sell you something or con you into putting money on for them, so they don’t “spook the bookies”. ha ha ha, yeah pull the other one, there’s bells on it.And of course they never do win, I was stupid/curious enough to check quite a few.

Anyway, I had an idea as I may have mentioned before. If these texts go to thousands of people, for example today’s one which said back xxxxx horse at 3 to 1 as it will definitely win, then surely there must be more than a handful of idiots in that group of text recipients who will fall for it. Why shouldn’t we profit from idiots, after all, they don’t have to be idiots!

So, I backed it as soon as the text came through, only for a tenner just to test the theory, as I intend to keep doing for a while (and have been), and then intended to lay it off nearer the race for a profit, if the idea works. It has worked before and it worked again today. Now there is no way to be 100% sure its my theory about the text gambler idiots, it could just be coincidence, but of course the longer I test it, the less likely that is, and the more likely that I have another nice little system. And if it does look that way, which it does so far, I may just get myself a sim card off ebay for 99p, stick it in an old phone, and plaster that number on a few gambling forums online and let the spammer’s harvesting software pick it up and stick me on all the spammer’s databases, there must be hundreds or thousands of them these days! Who knows, maybe this method could pay the bills alone!

Anyway, I backed it at 4.1 and as i am going out i didn’t have ages to wait, just interested in taking a few ticks and I did. If I had done this with a £200 stake, it would have given me a £60 win on that horse, and no loss on the others, so it could be used as a free way to bet on the tipsters horses, or just greened, or maybe greened in play if the horse is running well and the odds drop as they often do during their wild in-running fluctuations. 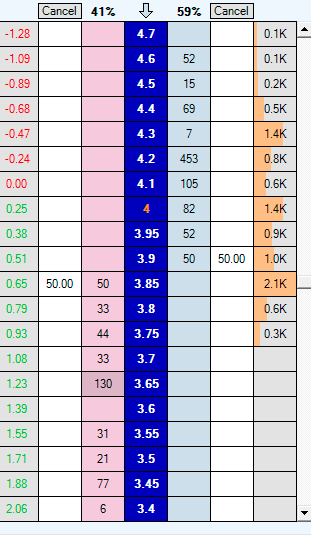 Just for fun, I then saw a double gap (the two closest back and lay prices with money in the queue) and so chuck it in a £50 bet on each side, which was nicely swallowed up by the punters in both directions, netting some more green. This is easy stuff, nice steady low risk trading when opportunities arise. Low level profits, and low level risk. Some dont like to sit there for just a few ticks, but I don’t mind it, and if you are looking for the safest possible way to make a steady humble income, I would say that has to be the bread and butter, just pinching ticks here and there. Of course usually I would be using much bigger stakes and trading closer to the off when money gets bigger in each market, but for now I am taking it steady and easing myself back in. It only takes a clumsy click to mess up, and i have done that before, so until i feel 100% in the swing of it again, i am being cautious!

Oh and PS…… I have deliberately not published the name of the horse or the race, the spammers might be reading and I want all the spam i can get now 😀