Sorry for lack of trades lately, I haven’t even had time to look as we have builders in after our roof started leaking badly during all this heavy rain we have been having. the place is like a bomb site at the mo.

Just a quick update on the Leicester trade (backed to win Premier League), well I got my numbers wrong and realised I hadn’t staked anything like what I thought I had, for some reason I have been going along thinking I had a few hundred quid backed here, but actually closer to £35! AGGHH! I assume I left my orders in and they didn’t get matched, then I probably clicked cancel. I should check as Betfair can make mistakes like this and I have had it before, but I am not too bothered now as other things going on to care that much.

The main point is that Leicester as STILL in my view not being taken seriously by the punters, and again all because their name isn’t one of the usual suspects who “should” win the league, “normally”! I am not saying Leicester will win, I am just saying their prices over recent weeks (10-20 to one) was ridiculously out of whack with their performance, results, and the immense quality in their team. I still do fancy them to win it, and very much hope they do (I do not support any particular team usually), but this is about trading not gambling, so as you can see below, just the very small market correction bringing them to just under 10-1 is enough for my piddly trade to see more profit available today than the entire sum I risked on the trade. And I don’t feel it has gone anywhere near as low as it will yet. I am undecided on whether to green some up, or hold on. I think I will take a bit of my liability out (as I meant to do before) and let the rest run. 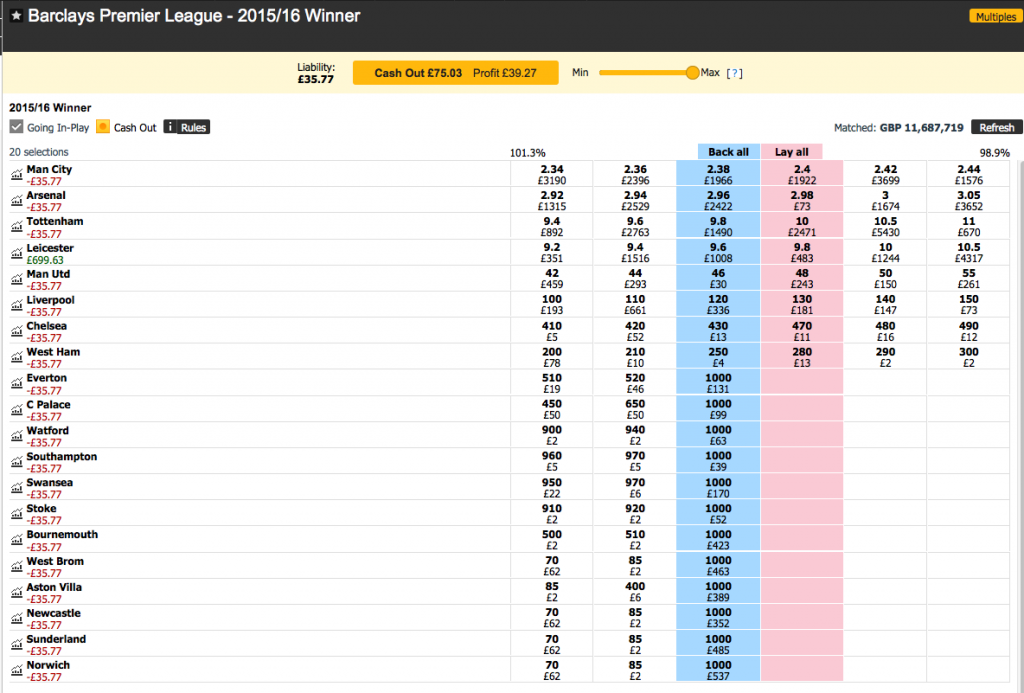