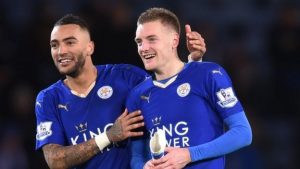 Well the Leicester trade is looking tasty, nowhere near as tasty as it should if I had staked it properly but hey ho, live and learn, must take more care over the buttons and numbers, I am a  swine for doing things at 100mph, it comes from trading horse markets in the last 60 seconds before the off, 😀

I backed Leicester at various prices between 13 and 36 over the past few months. Basically I just took any value that was on offer. When the team was priced at 20-1 while beating everyone out of sight and looking like Barcelona in their goal scoring abilities at times, I knew the ‘name’ of the team would cause value to be on offer in their price. After all, who every thought anyone outside London or Manchester could win the league?! Me, for one. But then I have no affiliation to any team, no emotion, I couldn’t care less who wins it, I just see what I see and it wasn’t hard to spot (for a very long time too) that Leicester was playing as well as, or better than, ALL the other teams in the league. So why were they priced at such high odds? Because people generally do work on emotion and ‘belief’ rather than facts and evidence. This means it takes a while for all the traders (like me in this instance) to back the price in to something more realistic, more in line with their actual form on the pitch each week. It works the same in the stock market. A company announces some clever news to entice all the investors (patsies!) to buy up stock in a certain company, talking heads screaming “great investment” (while not coughing up any money themselves of course!). Then the fools buy, the price goes up and up, then the traders walk in and sell it making a killing. It will always be this way, and it always has been this way. Markets can take many forms, but they all work in this exact manner without exception.

There have been plenty of news stories about the bookies being done over by Leicester supporters/punters. Ok these are just gamblers, and good luck to em! (This one is a good read) Trading is very different of course, but when value is offered, it should always be bought. My wife hates this about me though because every time we wander around car boot sales in summer I am constantly buying things I have absolutely no need for, just because they are “too cheap”! I can’t ignore value, and as a trader that’s the right approach, as value does come up quite frequently, as any full time trader will confirm. My friend made a few hundred quid over the Cheltenham weekend just taking up the TV offers he saw with the bookies offering big odds and no lose gambles etcetera to attract the punters over to their cash tills. He just took up any offer to back a horse at favourable odds, or any no lose gamble offer, backed the horse and then laid it on betfair. Job done, cash in the bank.

If I had staked what I normally would stake on a trade like the Leicester one, I would be looking at the choice between a £5000 free gamble which is looking more and more likely, or a fully greened up and guaranteed £3856, or anything in between. Instead I am looking at about £500 green which obviously can’t be sniffed at, but I can (and do) certainly kick myself every day for not taking the maximum value out of the opportunity.

I am back in the office now, not quite full time as per usual but definitely a lot more than I have been over the past few months while doing house renovations. Here’s to Leicester pi55ing off a lot of Spurs and Arsenal fans!

P.S. I forgot to mention my plan for the Leicester trade, as it’s not closed out yet……

I have looked at the games to come on 2nd and 3rd April, and whilst I am risking a lot of green, I fancy Leicester to win their home game and Spurs COULD lose or draw their away game. If those two things happen, I suspect Leicester might come in to 1.4 ish. That will be my full green exit. If Spurs win, and Leicester win, I still believe Leicester will come in a bit or at worst stay the same, since the points lead with remain the same in which case I will also green out the trade then. The only risk is Leicester not winning and Spurs winning. I can’t see that happening, of course it could, but the chances are small enough for me to risk waiting to see before fully exiting my trade. I should point out I have already removed all liability and guaranteed myself a minimum of £100 on the trade no matter what happens. So there you go, since quite a few people have asked me how I am playing it. back soon…