Well I am only half sorry! Usually I stick a quick update on the site before I do what I am doing! This has cost me a few trades in the past so this time I banged in a few clicks to get my bet on first around 1.68, then I dived over to the site to make the post, I went back and saw that in that 10 seconds or so, they had scored!

However, the joke is most definitely on me! I just chucked a hundred quid on, or I should say, I meant to! In my haste I missed a zero, so only had a tenner on it myself, so I have made the handsome of seven bloody quid or so! Grr! 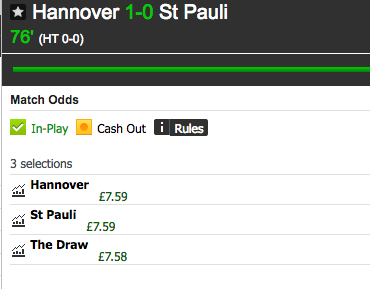 Just to add insult, I was just in the car 15 minutes ago and heard the news that Celtic were still 0-0, my next job after doing Hanover was to see about a position in that game, but looks like that one passed me by too! (Grenada was another one at 0-0, and Liverpool was looking worth backing at HT which was also mentioned on the news 0-1, missed the bloody lot of em!) Some days you just can’t catch it right, it seems today is one of those days! Hope the horses make up for it!