Las Palmas v Espanyol is a good example of how stats can, at least occasionally, be undone by live action. More importantly, this is why my lay the draw ebook talks a lot about money management and letting a bad trade go, without chasing it or trying to recoup anything. Losing trades are as much a crucial part of trading as winning ones, they are your costs of running the business, there is no business without risk or costs of upkeep. Losing trades are nothing more, just regular outgoings which make the greens possible.

In this case, the stats were extremely strong, so this was a good trade. No goals were scored, which looking at the sheet below is surprising, but that is of course trading. Surprises happen, this is the exact reason for managing the bank and stakes sensibly, anything can happen at any time, in any market. Planning for that, but trading based on probabilities is simply the only way to trade in any market.

As you can see, neither team has failed to score. The average goal stats are huge, the away team conceding 2.67 goals per game, and the home team scoring the same amount, most of them in the second half. These are stats to look out for, nothing is guaranteed, but look for angles into a game like this which is at 0-0 around HT and you can’t do much wrong over the long term. 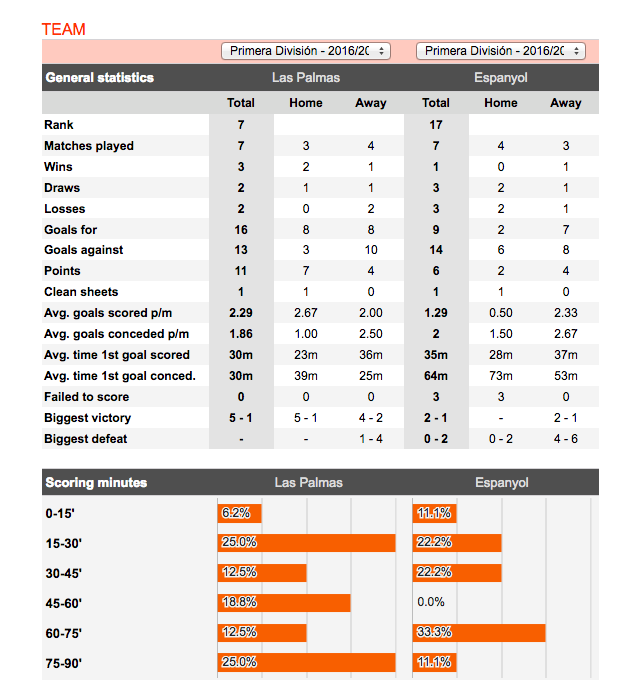 Betis v Real Madrid – I don’t think I will be trading this unless an opportunity comes up during the game, but it’s an interesting one to look at stats wise, here they are. Yes it’s Real Madrid, yes everyone would expect a strong away win, and so would I. But the stats tell at least a slightly different story. Firstly the last time they met they drew 1-1. That can be significant, not always, but can be. Secondly they both concede 0.67 goals per game, that is certainly significant. It doesn’t guarantee no goals of course, far from it, but it does suggest both teams could find it hard to score for a while. On the other hand Madrid are unbeaten away and score 2.33 goals per game on average. All in all this is a leave alone job I think, but in days gone by I would have considered laying over 2.5goals or laying madrid for 20-30 minutes from KO, depending on the play. I can see a chance that Betis could take the lead here or at least make things tougher for Madrid than the odds would suggest. No trade for me, but one to watch perhaps.

Norwich v Rotherham – At a glance this looks a great pick for a LTD. But as usual, before committing I do some more in depth stuff such as looking at who they played and who they won/lost to recently. This is where a few very small concerns come in, but at this price of 5.5 I think its enough to avoid it. I expect Norwich to do the business strongly here, but the form card shows they do usually concede a goal (which is costly to such a high priced trade) and Rotherham do score a goal in most games, again a concern. If it was 4.5 I would be interested, but at this price its another one to leave alone unless something odd happens to give us a better edge, such as Rotherham going ahead by 2 goals. Unlikely, very unlikely, but I would rather keep the old powder dry unless something kicks me in the head saying “trade me” 🙂

Newcastle v Brentford – It made it only the shortlist purely on odds, but one glance at the form card and the first thing I noticed was Newcastle’s 0-0 draw with much lower team Wigan. That’s enough for me to close the window right there.

Man 5hitty v Everton – Another one which looks “obvious” to a gambler, certainly to a ManCity fan, but to me there are plenty of flags to say leave it alone unless something odd happens again. Both teams concede too few goals so even though a 4-0 win is entirely possible, I would not chance a trade here unless it was second half and the price was excellent. Everton have a good defence, and a good defence is one of the biggest enemies to a LTD trader.

Hearts v Dundee – nowhere near strong enough to merit those odds, but one thing I did notice is this:

I like the look of that huge orange bar down the bottom. if the game is 0-0 or 1-1 at 75 minutes, and the price is right, I could be tempted to LTD for a very low liability.

Brighton V Preston – This is not brilliant but at the price of 4 it’s slightly tempting. I am resisting temptation though, unless it’s 0-0 or 1-1 at HT, in which case a cheap LTD will definitely be on the cards.

Aberdeen v Ross Country – rejected as a LTD, but I noticed their form when playing each other shows a lot of goals. All but one of their past 5 meetings saw 4 or 5 goals, the only exception being two goals in one game. More interesting is that last time Ross County won 4-0 AWAY to Aberdeen! This makes the price of 4.4 seem just a tad high to me! I could be tempted to have a dabble with U/O2.5 goals here, but would need to see half an hour without any goals to get interested, at which point I may have a small lay of Under2.5, adding to it around 60 minutes if still no goals.

MGladbach v Hamburger – Interesting one this. The price seems cheap if you just look at the awesome goal stats. But a look at their head to head shows why, these teams often have odd results, and either team could win it (based purely on their past H2H). The goal stats say the home team will blitz it, but the H2H can be of great importance in these types of games. One thing I do think is highly likely, is there will be plenty of goals. Knowing this is likely, there are various ways to take a position, including LTD but that wouldn’t be my choice. At 65-1 I might have a £2 dabble on the 3-3 scoreline, trading out later if the goals come. On the other hand, Might just hope for a tight first half hour and then see what the odds are on U2.5 and the draw.

Finally, Chelsea v Leicester. This isn’t a stand out trade by any means, but the stat which does stand out is the late scoring tendency of Chelsea, and the way Leicester seem to score all of their goals just after HT (some just before). Worth knowing this last point if doing a LTD which I won’t be, not from KO anyway. This is a suck it and see job. If Leicester happened to go 2-0 up at some point, I might be interested in laying them. If the game is level at HT, I would definitely be interested in a LTD. I may also look to take a position based on the late scoring stats or Chelsea, perhaps with U/O2.5 goals….. 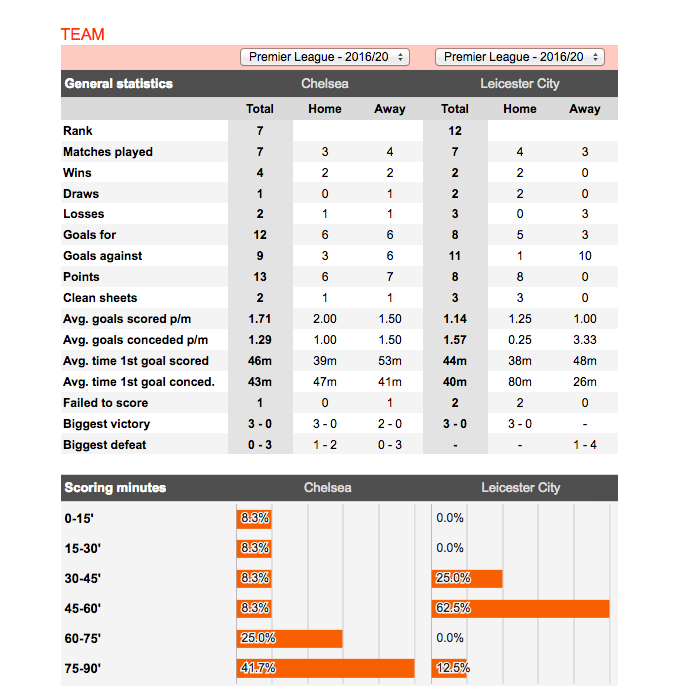