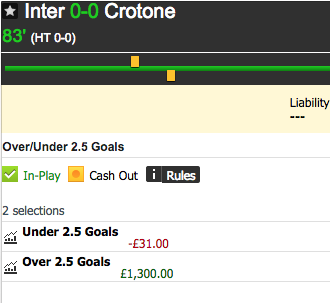 That’s what I was looking at, at 83 mins into the game. Talk about leaving things late. That’s why many of my LTDs are rejected, teams who do this regularly are worth keeping in a little black book for future reference, they are deadly for LTD traders, but great for laying unders late on. Who would have thought it would be 3-0 7 minutes later?! Well, me. 😀 In all seriousness, I didn’t think it would be 3-0, but I am fairly chuffed it was!

I am not going to be in the office much until later this week as loads to do away from the office, so until then, steady trading folks.