The last thing I want to do is discuss politics on the site, but just thought I would post how i made some small but easy money last night on that absolute joke (by that i mean the media coverage) of the election results.

I have been saying to friends for a while that Trump’s price was ridiculously high. I said that from 100-1 when he was an “unelectable joke”. I said it when he was 10-1 and had “no chance”. I said it when he was 6-1 and found guilty of what he called “locker room talk”. Last night I got so sick of the talking heads, the “experts”, the economists, political “analysts”, “opinion formers” etc etc, all constantly writing him off as a no hoper for the presidency, that I decided to open up the ladders and see what was going on.

Within minutes it was clear that with each bit of “expert analysis” (hahaha) announced on any of the mainstream media channels, his price shot up. each time, I had a little back bet, as the ACTUAL ballots were clearly showing no logical reason for the price movement, it was typical sheeple, betting on what they hear instead of what they see. I just did small stakes to make it a bit more interesting while I watched some of the coverage. Each time the results showed him gaining support, i laid the bet off. Then Hillary would win some votes and I would back the Don again, exiting after some more market corrections came in. It was like taking candy from a baby, and all because the typical gambling public (and by that I include the big shot hedge fund traders as well as high street punters) are so easily manipulated and led by talking heads. When will people realise, these talking heads are just there to look pretty, they don’t know a thing, they just talk like they do! So while they preached all night about how Trump “can’t win” as he is “unelectable”, his votes continued to challenge them. Long before anyone had won, just the ebb and flow of BS versus reality, netted me a bit of cash which made the experience more worthwhile, and helped me justify to my wife why I didn’t get to bed til late! So thanks media “experts”, I will enjoy our meal out and raise a glass to your incredible foresight. Sarcasm Off. 😀 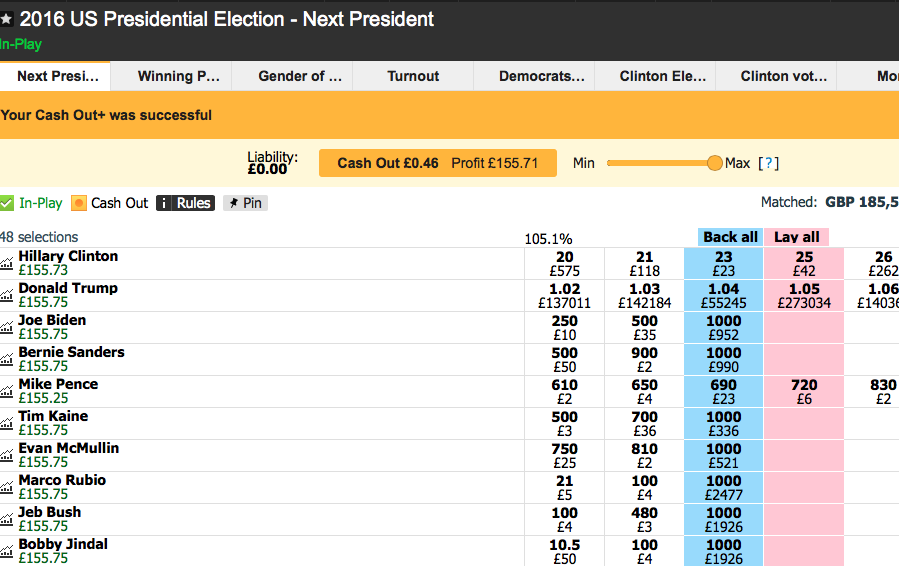 This is trading. The rest is hoping, gambling, guessing, wishing etc. Trade what you SEE in the PRESENT moment, what better demonstration can there be than this incredible shock election?!

P.S. Did you hear about Paddy Power? Unbelievable! See here.