I got home later than expected and walked in just after the Benfica goal on 14 minutes.

These Portuguese games are so often dreary and slow, the crowd is currently BOOING which is common in my experience on Portuguese games, and thats the home crowd by the way. The commentators even sound bored, there is just no zap to these games. Goals do occasionally go in of course, and its now just gone 2-0, but this is rare in my experience. I took the opportunity to study the odds on various markets after the first goal.

Under 1.5 Goals – FIRST HALF market. Due to this market expiring at 45 minutes, the pressure on the odds is twice as strong. Charts like this always interest me… 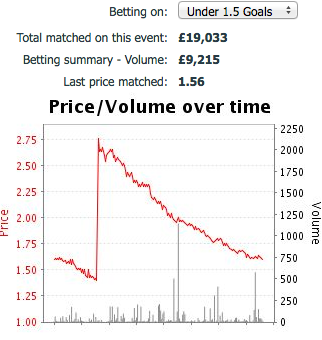 The price before the goal shows that even punters dont expect many goals in these games! but The jump up is interesting, and the drop down that steep slope which represents around 12 minutes in time after the goal looks very interesting. You could have backed Under 1.5 goals (or laid over1.5 of course which is converse) at anything up to 2.76. Within not much over 10 minutes its around 1.62-1.65. That’s a huge move, and a system looks worth looking into here. I am testing several things at the moment and in January will be very busy, so I am posting this to see if anyone else wants to play with it as an idea. Obviously some filtering of games is needed, low scores in first are quite common but I suspect teams who concede few goals, or teams who score few goals, with goals looking more likely in second half than first, would make the beginnings of a decent enough filter to start min stakes testing. The only risk of losing is another goal within ten minutes (I would stay in for a fixed 10 minutes every time) and I think this is a low risk factor across all games, but certainly on filtered ones where first half goals are unlikely anyway. This means that IF the goal comes in the first 20 minutes, the odds have a long way to jump up from, and return to, before the HT whistle, which I think offers good value and a good strike rate. I don’t go in much for hedging but a small back bet on 1-0 scoreline and perhaps 0-1 as well, could offer some protection, as could a small LTD for the duration of the trade.

I am just thinking out loud here, but that chart should inspire ideas in anyone who sees it. You ca’nt predict the spike up, but you can predict the steep slope back down with a good score alert app and a bunch of pre-shortlisted games. I may add this to my own stuff to test, but I have 3-4 things to look at first so the idea is there for anyone to play with, at your own risk of course :D.

P.S. I have laid Benfica in hope of a Rio goal which is a realistic possibility