Levante v Deportivo Alaves – I agree with you Al this is one of those you could be forgiven for ignoring based on the unimpressive stats of the home team, but it’s one of those where the away team is so much more dismal that the home team begins to look quite strong in my view. It may not be full of goals, but this is a game I would likely trade, perhaps a bit differently than a bog standard KO LTD though. 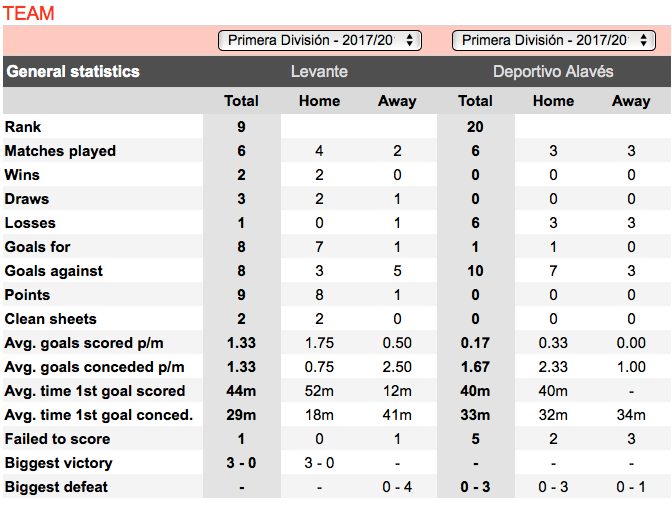 Levante are not on blistering form, that much is obvious. But Alaves are playing shockingly bad. Yet to score a goal away from home, I think they takes care of the (reasonable) risk of an away goal. But will the home team score? The stats suggest they will, but perhaps not until later in the game. As always there is no way to know if they will come out and score in the first minute, and I wouldn’t say a KO LTD is totally out of the question given the current draw price at 3.7. However I wouldn’t do that myself, 3.7 is too high for me on those stats. What I would be hoping for is a fairly slow start with the Alaves just playing very defensively to try to prevent conceding any goals. If that happens, those odds could quickly drop towards 3 in the first half, which would give me time to watch some of the game but even if I couldn’t, I think I would be laying the draw if the draw odds hit 3.0 before 40 minutes and it’s still 0-0. If an away goal did happen, I think it would most likely come in that first 20-30 minute period so that would be another reason to wait and get in at a cheaper price if all is looking good.

Huddersfield v Spurs – No! I wouldn’t touch it. it’s one of those to watch and enjoy with a  beer if interested, if not, leave it alone and walk the dog instead :D. I have taken on away LTDs in similar situations, but not with such unknown quantities as we have here. I could easily see a 6-0 win to Spurs, but I could just as easily see Huddersfield come out and take the lead, which could cause a very expensive losing trade. I also wouldn’t be surprised to see a 0-0 or 1-1 at HT, which could be a time when a trader might have a dabble on the game, but again I won’t be doing so. I will be interested to see how the game goes though just from an interesting observer point of view. I think I will have to post the H2H, it’s great to look at!  ……. 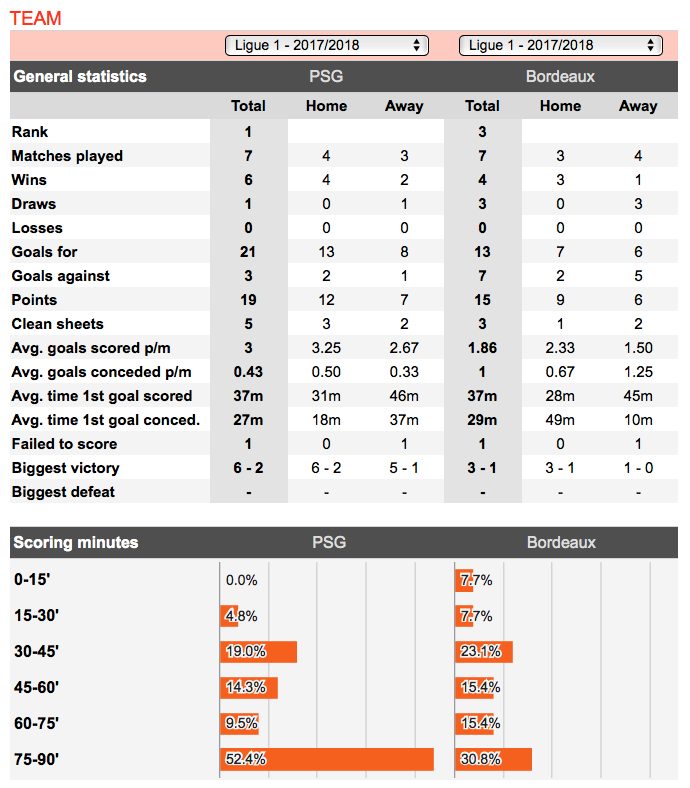 WOW! Yes PSG are on an amazing bit of form, awesome team they are and one I have had countless great trades on. However, the odds are 9.8 to lay the draw, and that’s just a complete joke. I couldn’t oppose PSG as they are indeed likely to blast in goals, BUT…. Bordeaux is a damn respectable team and they can both score well and defend well. So while I am still sure those stats paint out a likely smashing by PSG, the odds make it one to skip altogether. At least as far as a normal trade goes. If I had to trade it right now I would be laying PSG at 1.17 or backing the draw in the hope of some green ticks if the game starts out slow. Low risk, but low likelihood of success given PSG’s scoring abilities. A look at the scoring times above (bars at bottom) show that the last 15 minutes could be an interesting period, so if somehow this game is tight or level at 70+ minutes I might consider getting involved with small stakes and low risk lays if possible.

Cardiff v Derby – This looks a cheap trade to me. Even cheaper if you wait until entering around 30 minutes (if 0-0). I would probably have a half stakes LTD at KO, and double up at 25-30 minutes if its still 0-0. 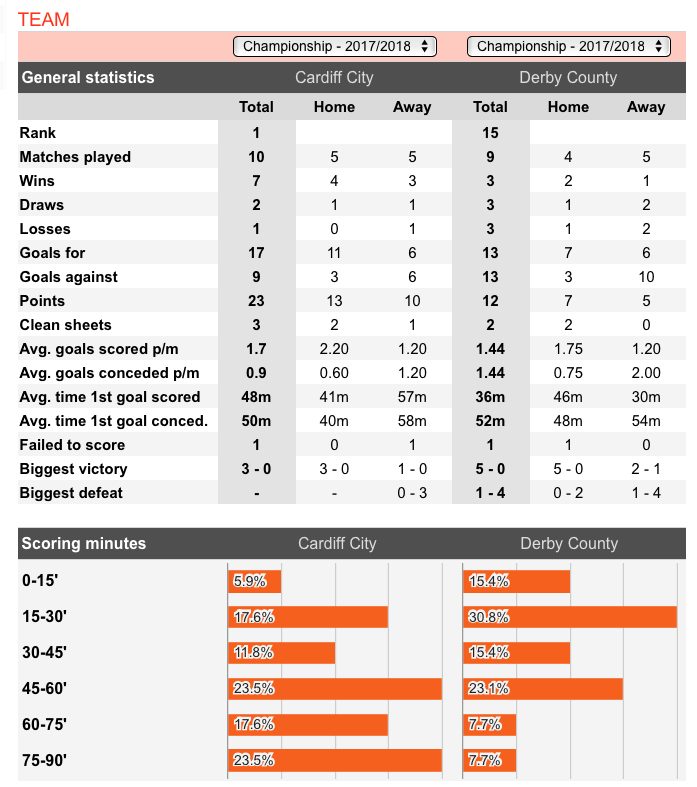 Preston v Sunderland – Not much interest based on a look at stats, but if nothing else I would probably have it noted down for a LTD at 60 minutes if scores are level, so long as the price is reasonable and the game looks lively.

Villa – Nope, wouldn’t touch that with a barge pole

Augsburg v Dortmund – I haven’t often opposed Dortmund over the years, but this is one time I might. They are a great team even when they are on a bad run of form they can produce the goods. But the price here seems more based on their historic prowess than their current form and stats. 1.5 odds on away from home against a team which scores 2 goals per game at home and scoring well in all their recent games, that’s just wrong to me, so I may lay Dortmund for 20-30 minutes and hope for either no goals or more likely (I think) a home goal. If Dortmund score (as they well might) then it could be a losing trade but a lay at those odds is a loss I can happily swallow. Especially compared to the upside of Augsburg doing what their stats suggest they certainly could, and score a goal or two in the first half. Risk reward job there, I don’t like to oppose Dortmund and really I am not doing that, I am opposing the odds which just seem out of balance to me.

Run out of time here so that will have to do….. just remember to read and re-read my LTD book (those of you who have been in touch today) and if you ever have doubts about a trade, stick to the “move on and wait for a better op” approach. There is no need to take a trade and no need to find a trade. Let them come to you, let them scream “TRADE ME!” or leave them alone and just watch the games and hone your paper trading skills instead!

For those doing pre race trading take it steady and be very careful of those deadly overlapping races, remember if the live pictures are not showing the race you are looking at, odds can go wild when the pictures do suddenly flick over to your race (after last race finishes), don’t be caught out. Better to sit out than sit in with your fingernails chewed to bits.

For those doing my In Play stuff tomorrow looks a good and busy day, so hopefully many more positive emails to come, and I do love getting them so feel free always!

That’s all folks, have a good weekend.