Well haven’t things gone utterly insane?! Somebody somewhere wants an economic depression the likes of which the world probably has never seen… ‘and this time, it’s global’!!

And remember, there were more millionaires made during the Great Depression than at any other time in history, perhaps until now, except now it’s Billionaires, with a BEEE. Jeff Bazos, Apple, Google Chairman etc, check out their earnings over the past year and we might have an idea why big tech is banning any opinions questioning the lockdowns etc.

Meanwhile thousands of small and family run businesses (the real heart of the economy and society itself) are closing left right and centre, butchers, bakers, greengrocers, hardware shops, hairdressers…… hell even Matalan and Primark closed in the town where my sister lives.

There’s a wealth shift going on from the masses to the few, and the misery to come is almost unimaginable, for the many of course, not for the few. Prepare folks, prepare. Working from home is sure as heck the way of the future for anyone intending on surviving without suckling at the teat of the exploding nanny state. And that teat will run dry when the food the mother eats (tax revenue) goes down the pan as it must if the economy does. And it certainly will.

When will people understand this incredibly simple fact… The only money the government has, is OUR money! The government generates NO money, it just takes ours and throws it wherever it likes. But when we have none to give, where do they get it? Duh.

Yes ok they can just ‘print’ more. That worked great didn’t it whenever it’s been tried before, as far back as the Romans, and what hapened to that incredible civilisation agian?! Remember those photos of German girls queuing up for a loaf of bread, each with their wheelbarrow full of ‘money’? That’s what happens when you just keep printing more, it becomes worthless, nobody wants it, and nobody accepts it. At that point, welcome to the stone age my friends.

Oh well, ours is not to wonder why, ours is just to do or die (wear your mask that is)! On that note, I keep wondering the most disobedient of thoughts….. 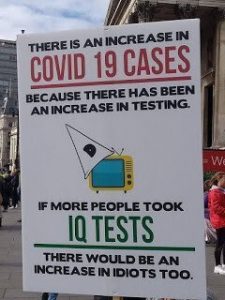 For how long were we forcibly prevented from being closer than 6 feet from anyone else, ‘social distancing’ they called it? Jumped up little men in yellow jackets at Sainsbury’s measuring how far I was stood from the next guy grabbing a pack of Jacob’s crackers.

No masks were ‘needed’ for a long time, just social distancing. We were told from dawn til dusk by the compliant media propoganda complex that ‘social distancing saves lives’ and how disgusting it was if anyone disobeyed the order, even accusing them of ‘killing Grannie’.

Something masks can do too, by the damn way. (As can loneliness, poverty, depression, being too scared to pop to the quack to get that lump looked at, or those occasional chest pains, or that shortness of breath, or that infected splinter in her foot…..)

Furthermore, if masks ‘work’ (to stop the smallest living organism on earth, a virus, which they can’t) then there’s no need for social distancing is there? Unless masks don’t work. And if they do, surely social distancing is no longer needed, not for the virus anyway, obviously it’s badly needed to stop people communicating and organising a revolt against this insanity. I truly believe masks will save lives in the long run, because those who don’t wear them may just end up being lined up and shot.

Has anyone apologised for lying or being wrong about social distancing not working? No, didn’t think so. There goes me again, doing that terribly irresponsible thing they used to call ‘thinking’. Sorry about that, won’t happen again, pwomise! 😀

I won’t bore you with any more of my take on this authoritarian horror-show, but I have been asked a few times when a new discount will be coming so with all that ‘Black Friday’ silliness, I thought now might make as much sense as any other 😀

Sorry, you will actually have to type that in to get the discount. If that goes against your sensibilities, don’t worry it’s not compulsory, you can just pay full price. No dictatorship here. 🙂

Take care everyone, sod the virus, but watch out for the street robbery gangs enjoying their freedom while the Police are too busy chasing people daring to tweet a non-conformist opinion, or picking up suiciders from motorway asphalt. (Friend of mine scraped up three just last week, all having been made redundant. I only wish I was joking.) On that jolly delightful note, do take care of yourselves and if you are still in a job (lucky you!) then I would start making back up plans at the very least.

If my hosting account isn’t banned, catch you again soon. 🙂

P.P.S. To lighten the mood, I will leave you with something which, when the penny dropped, caused me to laugh so hard I nearly had to remove my mask…