This is for those who are new to Betfair and the concept of LAY bets. 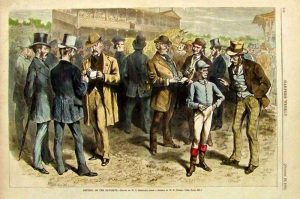 A Lay Bet is basically the opposite of a Back Bet. In the old days before Betting Exchanges, the only way to bet on anything was to visit your local bookmakers. You would then Bet ON something happening, for example you might think a horse would win a race, so you would back that horse to WIN.

However when betting exchanges such as Betfair came along, the bookmaker was removed, and effectively each and every one of us can now play the role of the bookmaker. So how does this work?

When betting on an outcome at the bookie’s, you are saying you will place a certain amount of money on a horse, football team or whatever winning the event in question. So as all bets have two sides to them, the bookie, when accepting your bet, was taking the other side of that bet. They were doing the laying when you were doing the backing. So when you backed a horse to win, the bookie was laying that same horse to win, or to put it another way, they were backing it to lose.

The betting exchanges like Betfair removed this middle man. Imagine you are sat with a friend and you have a bet between you about the outcome of a football game. You tell your friend you reckon Celtic will win their game, but your friend thinks they won’t. So you have a £10 bet between you. If they win, he has to give you a tenner, if they lose you have to give him a tenner instead. This is the simplest form of betting without involving a middleman and this is exactly how Betfair works. The only two differences are:

1. The introduction of odds, as you obviously need to know what the likelihood is of your bet winning, and there will often be more than two possible outcomes, which means if you laid a team, that would include the draw outcome. So we need a way to calculate odds, and Betfair does this in the purest form possible, i.e. allowing punters to decide on the odds. So you might offer to back Celtic at 2 or “evens” in old bookie terminology. If someone accepts your bet and LAYS your bet, taking the other side, then the price has been agreed at 2 or evens. If however nobody matched your bet, but someone was offering to lay at 1.8 and you accepted that by backing at 1.8, then that is a new agreement meaning the current price on Betfair would become 1.8 as that’s the price at which the last ‘exchange’ took place. Obviously there are millions of pounds being exchanged in this way every day, and so the odds are very stable and reliable. All of this happens in an instant using Betfair’s software. It is what trader’s call a “pure” market, it has much less manipulation going on like some of the financial markets. It is pure and simple, buyer and sellers, backers and layers, deciding what the “right” price on any outcome should be. This is great, as they sometimes get it wrong! In which case, a value bet might be on the cards!

2. The only other difference between using Betfair and making a bet with your mate in the pub, is the commission Betfair take off you. Obviously they want to make a profit here somehow. So they take a commission of your WINNING bets only. If you lose, you only lose your stake. But if you win, you win the calculated winnings (stake x odds) minus Betfair’s commission.

I hope this short article has helped newbies understand the meaning of “laying”, as it’s critical to being able to learn any type of trading in the Betfair markets. Once you start using Betfair trading software you won’t really need to think about this very much, if at all. But understanding what’s going on “under the bonnet” is essential if you want to become a sports trader.